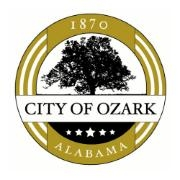 Funeral services will be 11:00 A.M. Thursday, October 10, 2019 in the Earl Bankston Memorial Chapel with Mr. Bryant Mixon, Mr. Billy Blackwell, and Mr. Alan Benefield officiating. Burial will follow in Westview Cemetery. Fuqua Bankston Funeral Home is in charge of arrangements. The family will receive friends from 10:00 until 11:00 A.M. Thursday at the funeral home.

Flowers will be accepted.

Mr. Goff, son of the late J.B. Goff and Willie Mae Weeks Goff, was a native of Ozark. The Goff Family owned and operated, Goff Motel and Barber Shop in Ozark for many years. He formerly served as Constable and Coroner for Dale County for many years. Mr. Goff also served as Fire Chief and Police Chief for the City of Ozark. In addition, he was Mayor for twelve years, served on the City Council and was a City Judge for Ozark. While serving as an elected official, he served on various boards and civic clubs.  Mr. Goff served as President of the Alabama Peace Officers Association in the 1960’s. In earlier years, during World War II and immediately following he was in the funeral business in Ozark. Mr. Goff was preceded in death by a daughter, Grace Kunz and his sister, Grace Segler.

To send flowers to the family or plant a tree in memory of Tom A. Goff, please visit our floral store.